Nearly one of those days

Dropped the landing net handle in, then my hat then my glasess trying to get them out.  Not the best start to the day. However I managed to get out of a snag, and three miscasts into trees losing only the bait so things were looking up. Cold wind,  bright and clear. On a curfew so no chubbing today.

Twitch back a yard and it suddenly just couldn't resist the half  herring that it probably had been sizing up for 10 minutes. One for the canoeists to admire, 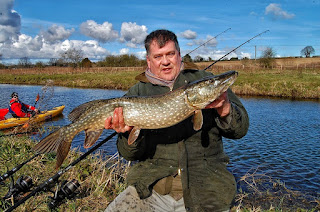 It had extracted a degree of revenge 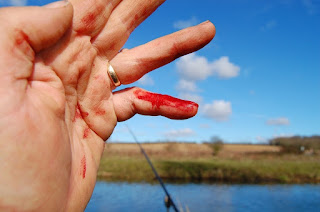 Moving rods and this smalller fish took advantage of a break in concentration and put on a show for the dog walkers. 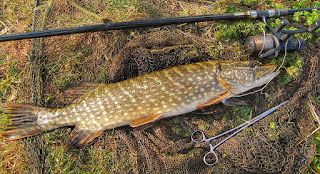 Just texting the Scribbler  and another half herring heading off downriver but fish only briefly on.

Chub on the agenda. River yesterday had good colour which  would make a day time fish more likely.  Greyer today. Bread and cheese paste out of freezer. Did I want to put the rod rests in the same holes as yesterday? Especially as a couple of pike rods would be in the holdall as well. Perhaps  not.

Pking then,  back up near  Kings Beck scouting out some spots for Scribbler and Lord TT when they are up for a day. Spitting with rain as I slide along the muddy mill path.  Decide to chance the long straight rather than  the hike up past the double bends.

Start on the bungalow bend. Rods in as the rain increases.  Musing on the variation of bites on the float. Rarely use a paternoster these days particularly as it's almost always deads.   At least 1.5oz of lead. Rarely a run. Mostly rod tip indication and bobbing, almost cray-like.  Baits getting smalller, even halving joeys and smelts. Perhaps pike need to nudge  the small bait to get it up and in their  mouth, rather like the plucking bites they give on quivertipped meat. If a strong up streamer like today float at rest often moves up to a tighter line then back down with the flow. Where possible all line off the surface to avoid getting debris coming down.

Today the perfect line just on the flow up to the fallen willow in Bungalow Bill's back yard is not rubbish strewn so no need to be mending and moving.  Float gives a little jink. Debris subsurface striking line on way past always gives little pluck but this time the poly lifts twice and then is held just subsurface. Wind in and long flank twists and flashes. Margin here on the 90 degree bend shallows go a good way out so it's a slide over the silt,and a plump fish is  soon being given the hold and grin treatment.  11.11. That'll do nicely. 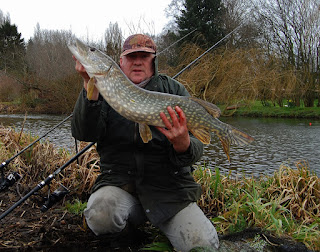 Prospecting down the long straight. Hasn't really produced for a couple of years but you never know. Well trod by Tarka.  Worth pre baiting? Must be a reason why the otters favour such an open area. Rain now cold and driven, and bank become Somme like.  February fill-dyke to be sure. Hate drying things off when they get so wet.
Posted by Bureboyblog at 22:26 No comments:

River again, unexpected couple of hours so grab the opportunity. Low,  but some colour. 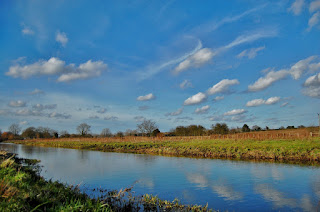 First fish dropped, weed around bait. This one fell to a four or five turn inducement. Very small and deformed ventral fins. Picture salvaged from an inadvertent 1/4000 sec shutter setting .

Posted by Bureboyblog at 22:18 No comments:

You can smell the snow coming

Snow in it's way, you  can smell it in the air. And taste the salt from the big sea up and running today. 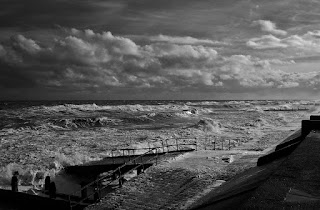 Harrier wind blown over Horsey,  Kestrel over the snow drops and buzzard above the copse. 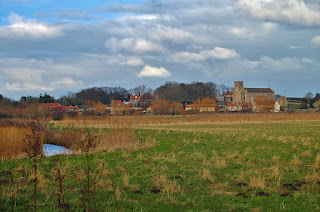 Never mind Bastard Barry. Bastard wind. An absolute howler right up the reach strong enough to take line from the  bait runner. Cold as well. Not that it looks like it here.

Read more »
Posted by Bureboyblog at 21:58 No comments:


Caught this yesterday morning from the front of Bureboy Villas,  Similar phenomenon last night but against a clearer sky if Facebook is to be believed. Nacreous clouds apparently.

Passing near Castle Acre on the road to Zanderland  and I had forgotten the local penchant for naming pubs The Ostrich. Must find out why sometime. I am not good at roads that have no discernible edge separating them from the gunmetal grey waters. So it was good that it was light by the time I reached  the flat lands. I am not sure I would keep my automatic if I moved up here. Or drive in the dark.

The Essex Scribbler had hungrily beaten me there. If you want to get the early worm calculate a good 45 minutes before he claims he will be there...Time for a good coffee and  an admire of TT's vintage press, log stack and of course his muse the (in) famous transformer pylon out back.

Warnings of Bastard Barry and hobbling Achilles nips.  With that the mood changed and we were bundled into the back of  a pick up, the Truckman Top windows blacked out and  a switch back ride over and back over bridges, followed overhead by the thrum of an Apache. Lurching to a stop we stumbled out blinking in the low Fenland light. Mobiles were roughly snatched and GPS and Google Location disabled.  Shadowy figures watched from low, functional non-descript agricultural buildings, brightened only briefly by splashes of bog door blue.  Dire warnings of not revealing where were we were (we didn't know) and the tension subsided.  The afore mentioned Bastard Barry paid little heed to us, however a very sleek whippet noticed us arrive. It noticed everything arrive and leave.

The Scribbler and I are used to the littoral edgelands of saltings, mirram dunes and shingle ridges. There is no edge to the land here. OK, there is the high land, two to three feet above sea level that is dominated by more agricultural buildings, grain dryers and silos, the odd tree or church. Telegraph poles lurch off haphazardly leaning. Nothing would stop a high velocity round until it found you. The horizon just goes on and on and on. Nothing to stop Storm Henry as it wound itself up good and proper, waves tearing down the drain and lashing the reeds level. Above us Uncle Sams's boys and no no doubt gals were tearing up the sky, before heading out and going supersonic over the Wash ranges and beyond. Not particularly feature full these Fen drains.

TT was already into a pike, the wobbled roach having been snaffled in only a couple of turns of the reel. Scribbler  had  had an abortive take and was off prospecting the next spot before I had finally found a more gentle slope and got the baits in. The orange poly started to move faster than the pushing waves and the Conoflex  glass 2 and 3 quarter veteran hooped over. Teaching for the net I saw my rucksack sliding gracefully into the water. All around Henry raged. Throwing down the rod I rescued the rucksack  before scooping up the pike in the net.

My first Fen tiger. Drop snout  and arched back. I gave it about 6lb.

TT had found a few  baits on the pole with his Christmas issue maggot and caster and  Scribbler had slunk back up to the confluence and been blown back again by Henry before  one of my sardines made off again and this was a bigger fish. Barely hooked and a parrot beaked pug that went somewhere over 10 we judged. 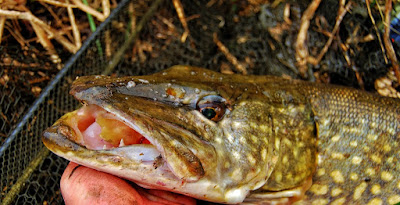 Hunger called and I begun the somewhat protracted business of cooking lunch in a hooley of a wind, keenly watched by the whippet, in between it chasing and headbutting pick ups. Letheringsett flour rolls courtesy of Sue, good local proper bacon and sausages, and  a mug of tea. Civilised piking. 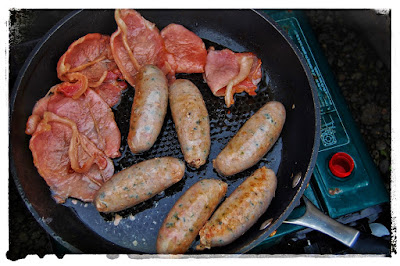 Back to the rods and for the Scribbler round 4 of his duel with a little snapper that finally succumbed to his drifted in presentation right under the staging. Cropped shot to maintain the secrecy of the location. 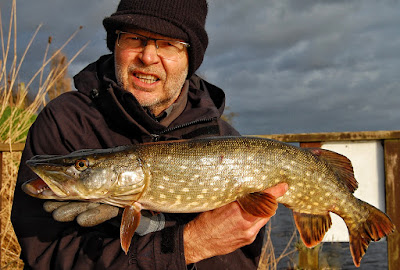 Now. I've alluded to the hungriness of the Scribbler who can usually barely rest in  a swim normally. He probably leapfrogs himself. Today he was strangely drawn back to that staging. Here he is reliving his match fishing days. Did you know he used to fish matches? 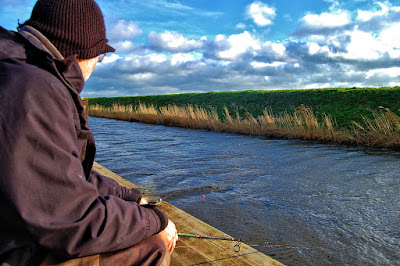 In  between an increasing barrage of calls and texts trying to persuade me to leave the rods and put the kettle on he was suffering a lot of this. 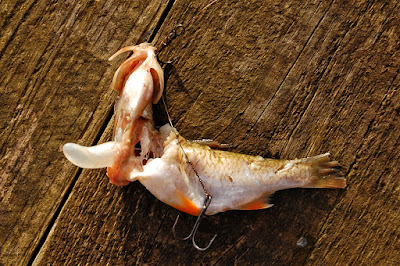 Exasperated at my slow food technique at lunch  his burner was encased in a bucket and set to work. Despite this highly engineered solution  Storm Henry was trying it's best to scupper things. Not content with blowing out the gas it nearly took TT and I off our feet twice. I am nearer 20 stone than 15. Finally the double bucket adaptation prevailed and a scalding hot tea was enjoyed.

Another scrapper for the Scribbler  was deftly returned with a flick of the forceps and TT persevering with the  wobbled roach has one more dropped chance before our day ended.

I have yet to see TT cast overhand, the deft underarm flick being his go to method. Spot the airborne roach. 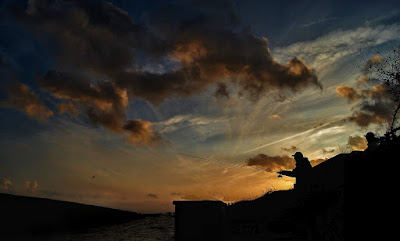