Lovely mild autumn afternoon and a pint of casters to use up. Throw in a tin of hemp and that's a good recipe for roach. Wind over my shoulder and nice calm water in front so ideal for a fine tipped waggler dotted down to a mere blip. #14 B560.wide in the gape and fine in the wire. Perfect. No afternoon bonfire smoke but a local church bell practice making up for it. 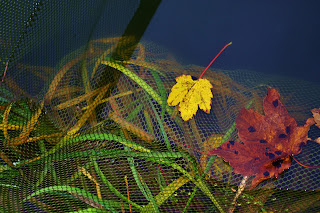 I've never really found that casters do actually produce bigger fish but there is something about the delicate bites they seem to produce, and when dotted down like today the float just melts away.  I had decided no pellet or corn to see if I could target just roach and it nearly worked perfectly. 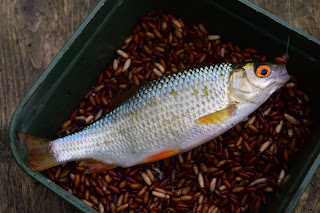 Three small hybrids (here are two of them) and a tench that eventually left the hook in a lily stem after the hard grunt. 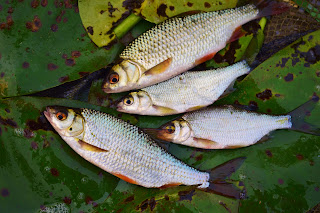 Otherwise it was roach a chuck. None needed the landing net, the one that would have didn't make it as it was smashed into by a decent pike that took quite some time to decide to bite me off. I kept some in the big landing net for a piccy. A most splendid afternoon. 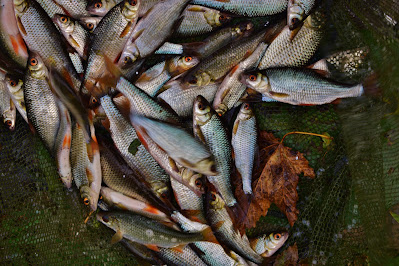 Things that were supposed to be..

Friday was supposed to feature an afternoon tempting  Fenland zander and perch but work demands meant my only relief was a decent coffee on a slightly earlier journey home. Cracking weather out of the wind.

Saturday was supposed to see some livebait snatching then perching on "my river", the livebait spot had been fenced off so I headed back to the main river and trotted the near glide to see if I could find some decent roach. I didn't. But I did find some nice dace and  a couple of tiny but pretty roach. Which was nice. 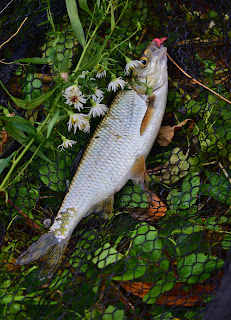 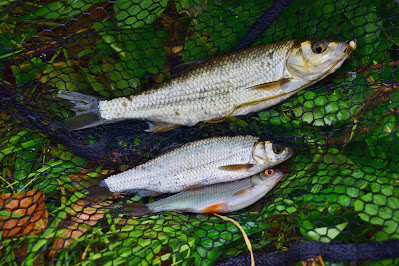 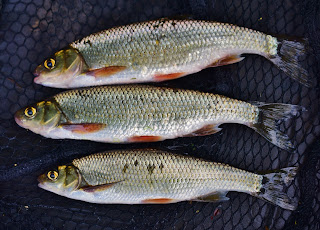 Pint then off to buy a pint of whites. It must be Saturday A nice Woodfords Wherry. 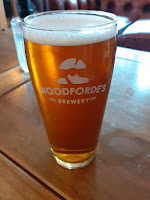 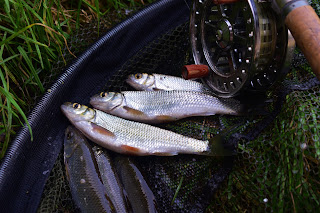 This one was far too big to consider lip hooking on a #2 circle hook. The brownie that is. It gave me  a right old tear up. 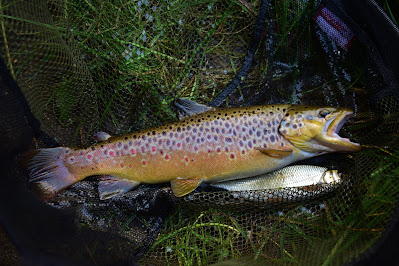 Stopped at the top pool on the way back to the charabanc and had a few more dace before heading back home. A lovely warm day. 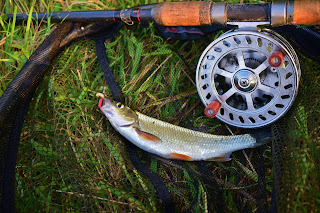 Plans had been laid for a Bureboy first, the snaggle toothed zander and The Loafer had scoped out a dead cert. The day dawned  and it was very wet, So wet it took till 9 to be dry enough to load the charabanc and get cash. The route? Piss easy, A11, A 14, a brief dalliance with the M6 then through Rugby on the A426 and Bob is your uncle. He might well be but my sat nav hadn't been configured for the A14 Cambridge to Huntingdon "improvement" and at around Huntingdon I got caught in a increasingly Michael Douglas like rage filled drive along two parallel new roads that the sat nav had heard of but didn't believe really existed till I found my back on to the trusty A14, cheered by The Loafer's gloating news that he'd arrived and had a brew on. Several piss stops later I saw the decidedly silver fox like Loafer, indeed loafing around on a pretty brick bridge over our intended waterway for the next 3 days. The journey had indeed twisted my melon but the Loafermobile would be a welcome refuge 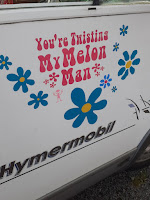 Tea drunk I was instructed to load myself up like a pack horse for the "short" walk to our intended destination. The Loafer's estimation of distance is as variable as my sat nav's capabilities, and sort of half way along  the "1 km" we searched around the entrance of  a marina in an increasingly bitter and cold wind before upping sticks  and arriving at Nirvana which seemed a lot further than a kilometre... Our tactics were simple enough, a small section of bait (smelt for me, roach for The Loafer) either fished with a light float or a simple  running lead and we stuck with these for our trip. The Loafer  had a few plucks and missed takes before his white float  started to move towards the rushes round some structure and he was soon carefully holding his schoolie prize up for the trusty BureBoi Nikon. And despite what The Loafer will tell you, the 30 years plus aging App has not been applied post production. I might have even used the retouch tool to smooth a few "laughter" lines. 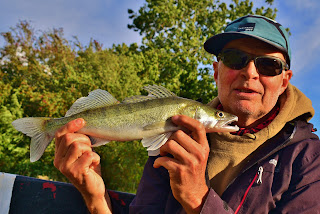 We worked back to the  campsite, with me indeed blowing out of my fat arse and enjoying a brief sojourn round dusk as the wind dropped bringing  a few drops of rain but with no further action. Back at the Loafermobile I hastily organised the charabanc in case my Hannibal's elephant decibel level snoring induced a banishment into exile whilst The Loafer began to cook up a decent curry. My organising was cut short by an unforecast deluge, we had been very fortunate not to have got caught up in it, I can't imagine the misery of having sodden wet gear  to work with for two more days. As scribbled by The Loafer in his report we did indeed dissect British society over a decent oaked Rioja whilst The Loafer ingested half of LIDL's crisps stock. I popped out for yet another piss and the Loafermobile had been transformed into a 4 berth luxury home. Give the likelihood of my eviction I got in the sleeping bag fully clothed which in hindsight was very fortunate as I spent an inordinate part of the early hours holding in a fart, not because of false modesty but a real fear of unfortunate consequences and my eventual dash to the conveniences was on the cusp of nearly but not quite. The Loafer  told me he had not heard any snoring, partly I'd guess because of his ear plugs and his own snoring.
We decide to head along to a more natural section of the canal to try for the "silvers" which The Loafer assured me would be in bagging up quantities for the morning before lunch and a proper into dusk session. 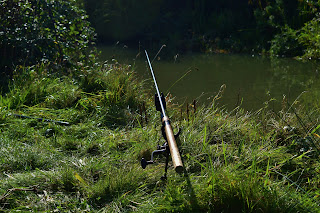 It was very fitful, with one or two bites, then the buzzer alerted me to a predator's interest in my bait and after  a spirited tussle my first zed was on the bank. Chaos of scattered rods, landing net and a scowling dog walker bemoaning the fate of the "poor fish" saw me return it quickly with no real time to take it in. Very pleased though. We retuned to the site for a tasty omelette and I slimmed down my tackle to a manageable bucket load. We'd arrange to met up with a local Guru and we set up near The  Loafer's lounging bridge to wait , much to the ire of a curtain twitcher who was soon out to tell us we couldn't fish because of the power lines 30 yards away.  So we went under Billy Goat Gruff's Bridge to fish like Trolls.

The Guru skilfully directed us away from his hallowed spots but imparted some useful gen. The Loafer drew first blood after a couple of dropped takes, but it was spotty rather than striped, a little pike. 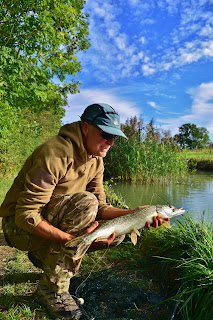 We worked up to another marina as dusk approached and fellow zander men appeared out of nowhere to ply their nocturnal trade. I remained biteless but Loafer had a few schoolies. 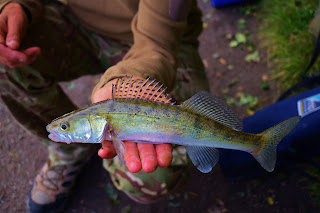 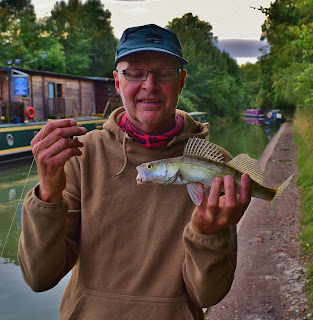 More than a passing resemblance to the vibrant video personality Mark Wintle? 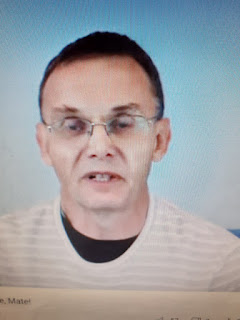 Back to the Loafermobile and a feast of cheeses and pickles, serenaded by little and tawny owls. Shining times indeed.
Despite our dismal failure on the "silvers" on the second day we thought we knew better but a constant draw down had clearly unsettled them so we upped sticks to fish back down to the van with two zander rods each, and leapfrogging down the near channel. A pair of martins hawked about, a trio of buzzards wheeled and mewed overhead and ravens kranked darkly whilst the boat folk got about their daily lives. 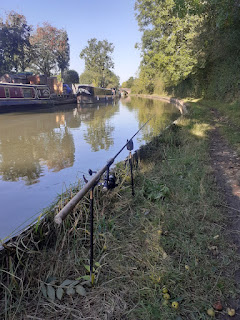 In sight of the van, and picking the rod up to retrieve as a boat neared I struck pay dirt. A fish on, and what a fish. An absolute beauty of a zed. Over the moon with it. 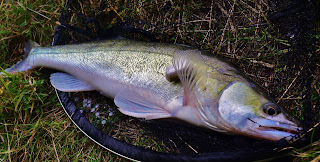 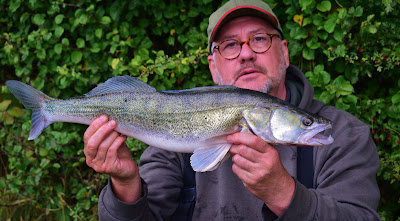 A stunning end to a cracking trip, cheers WAAK. Now for some undisclosed East Midlands still water 20's and a few more slightly closer to home Fens zander. Oh, and I got lost again at Huntingdon. Improvements my arse.
Toodle pip..
Posted by Bureboyblog at 11:19 5 comments:

In lieu of conkers and leaves and stuff I give you this:

It was bloomin' lovely, don't think much more street/park food this year, autumn is with us now.

Not much more of the same

The weather has turned with a savage blow, just as I was reminiscing when 1st October would usually be thermals time so there may not be many more dreamy breamy days till the spring. So, make hay....

Just the three on Saturday in a couple of hours and those were on the feeder. 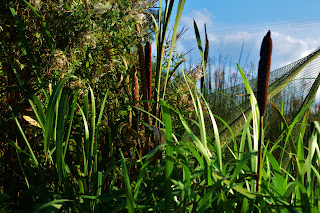 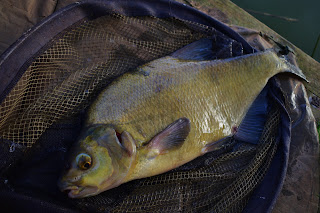 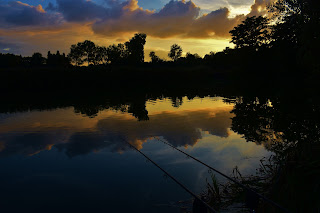 There's silver in them hills

Whilst the populace queued and fought over fuel and my work done I queued for snake oil from Mr Pharmacist then sneaked a few trots off the concrete tank traps guarding the mill, and gave the mostly masked passengers on the 210 Sanders service a dashing display of dead accurate feed, trot, strike  and bat back stick float fishing at it's finest. Well, if the float ran through the sweet spot anyway. Which it did a few times. Warm out of the blustery wind, and the light  taking on that sublime autumnal quality. Here's a sample of my spoils. And back home just in time for my tea. 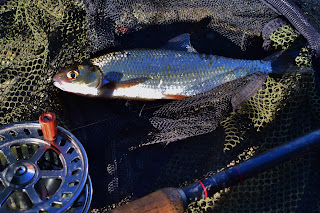 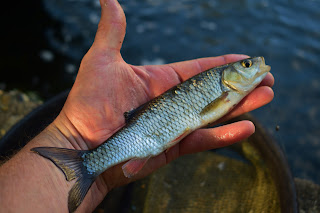 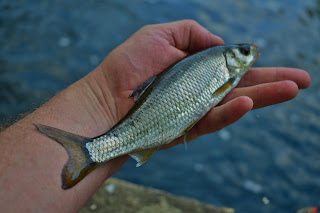