The insipid Anglian region byelaws have a cart horse sized loophole through which you could drag a jerkbait through. Non-migratory trout can be fished for with artificial lures in running water during the coarse closed season.

You can see where this is going considering I am "in between" floating lines. And I have a river with stunning little wild browns. And a trout permit.  Not a flying fishing permit,  a trout permit. Probably not very far but let's see.


I have been thinking about some small soft drop shot fry imitations for a while.   Certainly could be cast on a flyline with a wrap of wire on the hook or as a point lure under a bit hackled dry on the dropper. That's for when I drag my sorry carcass out to Dangling Direct.   For now drifted and twitched back down a riffle or back up the crease, stopping here and there on a drop shot set up. . 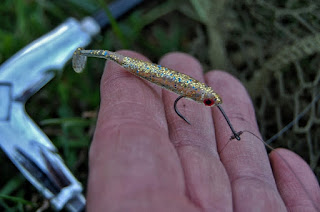 Into the water below the mill, into  what is probably called thin water in higher circles than mine. Different perspective and that dragging insistent water push. Glorious.

Played about with the length between weight and lure, and at just what current speed  I could get the balance between it being dragged through  with no contact and getting hung up. Of course, if snagged the narrowing  loop would cut the line at the weight if pulled hard,  hence drop shot.

Puling backup stream gave far more possibility for retrieve variation,  and given the paternoster an option of holding steady,  or twitching in one spot. Of course though, wading down to fish facing into the flow would not be too clever.

Either way in the water the twitching lure liked every part the Peter Ross.  A sharp tugging take unfortunately  not converted into a little spottie.  Perhaps braid would be better after all.

Down past the fry  at the Canoe Man fork.... perch perhaps and down Cyanide Straight  which was showing why a return with a floating line was called for as it was alive with rising fish.


To the rail bridge and the Point bush.  Jagging take and briefly in the gloaming the darker body raised an apidose finned hope. No, a dashing little Sergeant that had fairly woolfed down the lure,  All bristly dorsalled cockiness and bluster. 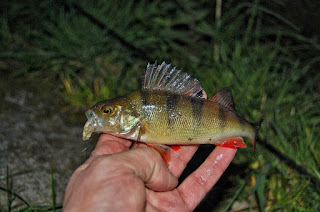 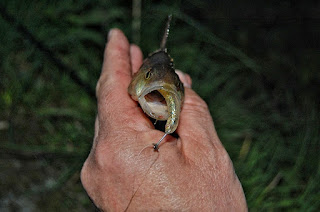 What you don't know is how many chub, roach, dace and trout were on the gravel run...... I don't either as I forced myself not to look over the bridge.

Got home to find the permit rules had just been changed to fly rod only.... no excuse then.  Still it was first fish on the drop shot and though I won't be buying  braid or chesties I will be getting a new floating line.

Now,  if I was urban perching it would be wasps (small perch), bandanas, hipster beard and piercings. But I am not.  So I won't.


But I will be researching what fly might imitate a drifting price of flake or rolling lump of meat because I know just what, and how big, and how many fish will be on that gravel right up to the glorious 16th.  That is brownies obviously.

It's been a difficult week with what they called a technical redundancy. I await my fate.. 33 years of public service for that. Heigh  Ho.  4 blanks in a row haven't helped so Saturday had a lot to live up to, especially after my Saturday is shite lambast last week and Col U 's inevitable slide into League 2 surely confirmed by 4.50pm.

The newly reopened Stage 2 was occupied down the side by a bivvy boy. so it was back to Stage 1. Swirling wind taking the edge off the late afternoon spring sun and as soon as I stepped on the platform the cob swan hove into view to await the first pult of hemp. Bugger.  I decide then to fish little and often stylee till he got sick of me. Despite the wind the peacock waggler was held nice and steady with two No. 8's down and not long before the grain of corn on a barbless 14 was taken by a decent fish. Flash of silver,, splash of red and hope pike doesn't get this. What a lovely fish. Looking later tail perhaps not quite right but who cares, 100% roach or not nice way to end a dismal run of blank sessions. Not sure about the tail colouration. 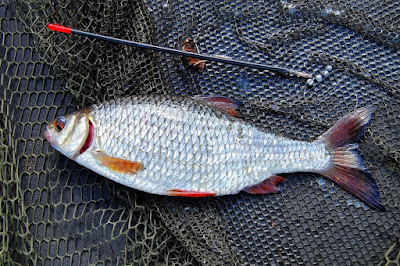 By now the swan was getting into a right hemp frenzy and the inevitable hookup happened. The rod had a crack which I had meant to tape for ages and as the barbless hook pulled out the rod splintered half way up the  butt section. Nothing for it but to break out the newish 1.5lb tc 12 foot Korums. I had screwed a couple of eyed hooks to hold a bank stick at the front of the staging and for the first time ever employed one of Wak Lite's cast-off buzzer bars. Quite what he used them for I don't know.  For today though ideal. Used the ruck bag as a rear rod rest and some semblance of order established . Not too keen on link ledger and bobbins so close in but needs must. Prawn on a size 8 sedge hook of course, the manky chick peas had gone past soft stage so instead of two a hair it was a couple of grains of corn direct to hook. Swan continued to do my nut in, upending all  over the baits and a slough of despondency descended on me amongst an extended burst of swirling, stinging hail.  Nice


Swan had buggered off briefly. Had  a firm take on the corn and a supercharged bream punching way above it's weight threw the hook right at the net.  A second on prawn only on briefly then another lost on the top. Was it the new rods? Where they a bit fierce? I did loose that tinca on the res as well? Perhaps the long tags I was leaving to fashion hairs were interfering with hook-ups? Trimmed them and took advantage of a protracted swan/canada goose stand off  to load in some hemp corn and sloppy chick pea mush and instant results from this little electric blue hybrid on corn followed by two proper bream who preferred the prawn.. this little feller really was a mix up 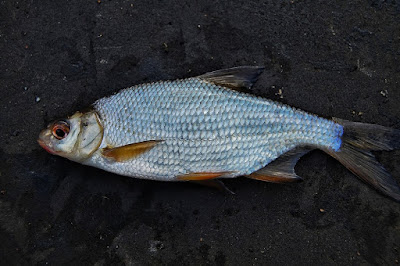 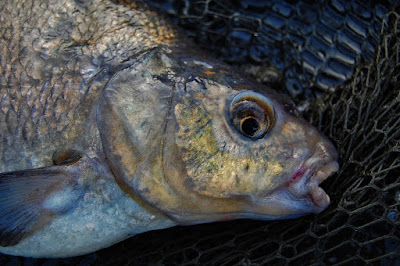 Cleaner version the second one 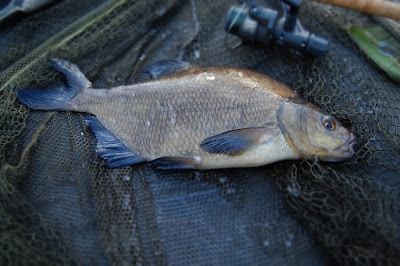 It was getting much colder now, cold enough for gloves and perhaps too cold even for the swan who
was skulking about in the reeds. Characteristic charge off on the corn road and a decent tinca was having a right go, even causing a passing white van man to slow down and watch. A bar of smooth soap, and true to Captains form another tench colouration variant. Never seen red fins anywhere else on a tench before. Very solid and certainly over 4lb 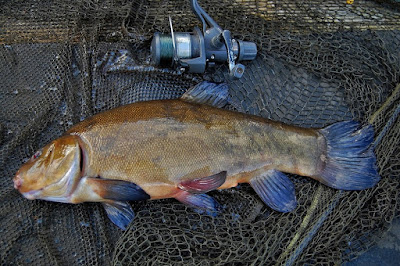 Last fish of the day again on corn was this absolute pearler of a dog roach. On cue the first buzzard of of the day mewed overhead and off the staging I bounced, a colder but much happier Bureboy. 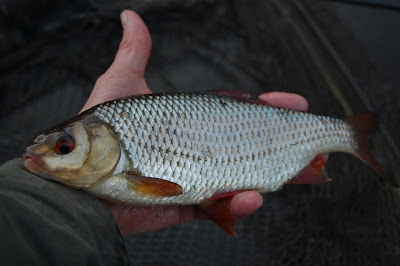 Never have liked Saturdays, all that hitting the Mall and shite evening telly. Haven't been out on the piss for about 30 years. Not even  going to the footie  at the moment, and that is what really has made this god forsaken day bearable for so many for so long.

Two days of rain didn't bode well but these glimpses on an extended carrot cake run as the rain abated did  lighten the mood.

First flush of blue amongst the stinking Ramsons 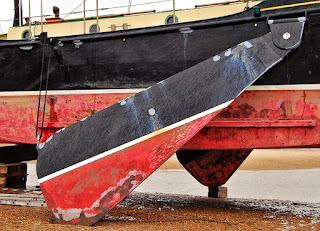 And a big swell coming on shore 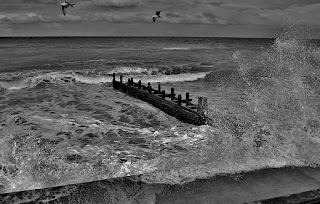 And there is Match of the Day later....

Stopped on the way home from getting the milk. Broads area close season but some wild rudd moving... 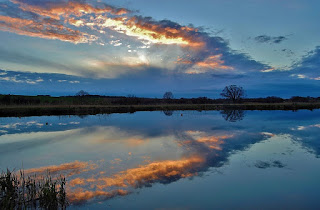 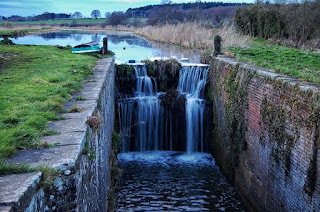 Posted by Bureboyblog at 20:38 No comments:

Short notice pass out so off to the Ressie and in the car park just past 6 o'clock. So short notice chick peas still mostly frozen. Smoked paprika and hemp soakings. 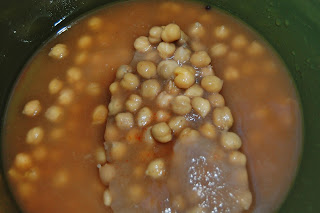 Plumped for the car park end  into the wind and as I set the rods down a carp leapt noisily. Dye has left a blue cast in the water.

Double chick pea down the edge over hemp and prawn straight out. Just got both indicators on and a steady lift on the right hand prawn rod.I half expected a Roach but was soon backwinding. Established it was not a furious mud pig but hard to get to the top to see what it was just in case and eventually that was my downfall as the tench (for that was what it was) , and a decent one at that threw the hook. Oh poo .Some activity onwards but no firm chances and rods out by 8 as the bats were becoming very active.


Posted by Bureboyblog at 22:30 No comments:

Allowed out for the afternoon,  first day of real warmth so decided on feeder fishing off the island to take advantage of the shade of the Norwich bank. Canada geese nesting so that paid to that.  On to the staging and at first the swans  seemed distracted by the geese but that didn't last long and  so begun a  cat and mouse game of trying to feed only when the swans were up-ended.

Managed to snare a bream of about 4 lb on corn and then this skimmer. 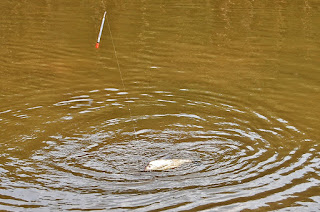 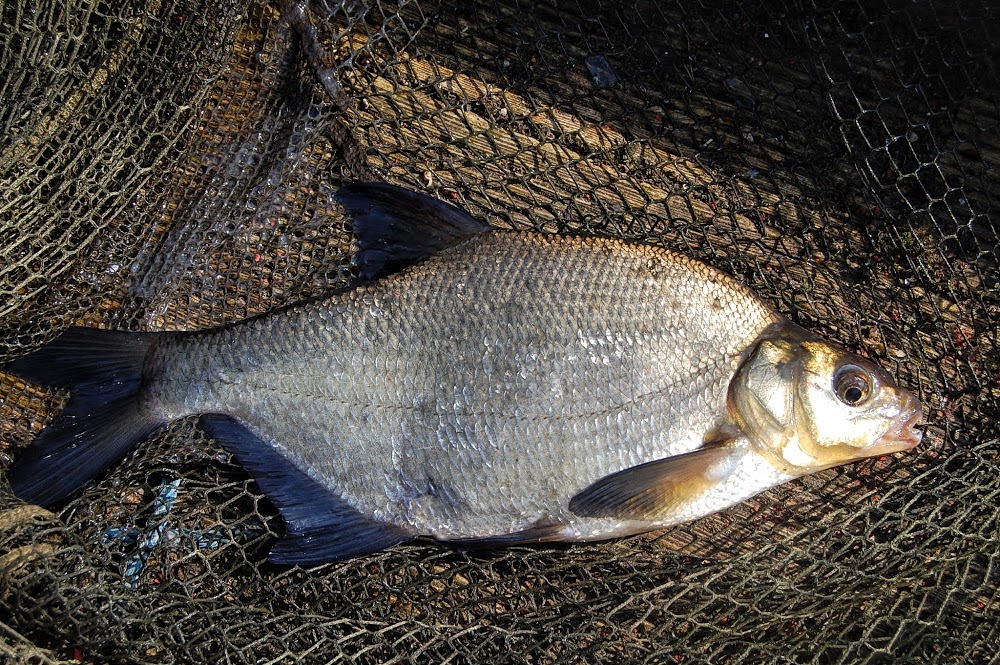 The male swan had worked itself up to a hemp frenzy and was getting on my norks even getting in on the act of netting this bream. 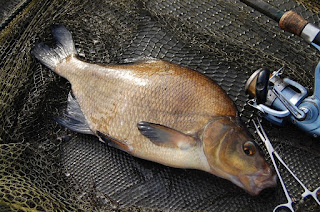 This roach stayed on but a bigger example  dropped off as I  bullied it in away from a lurking pike. 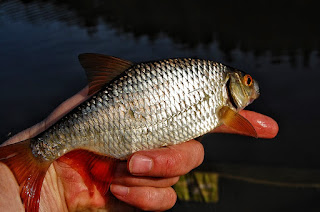 Throughout the afternoon the reeds and tree roots were awash with moving fish,  spawning or chasing tadpoles? 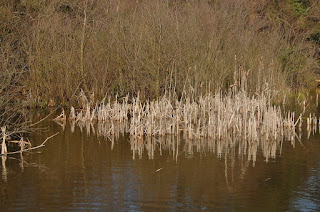 A spirited tussle signalled the first tinca of the year and one in the eye for the swans. See it's teddy bear red eyes? 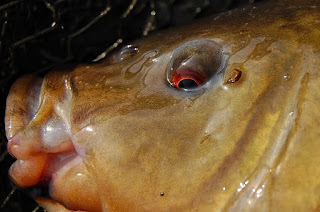 Posted by Bureboyblog at 22:41 No comments:

Early doors to work on a frosty April morning yesterday. 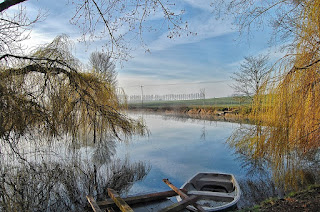 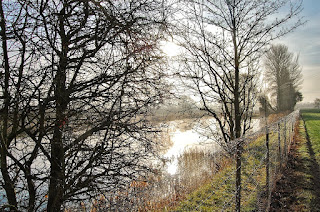 Posted by Bureboyblog at 08:00 No comments: